An Onslaught crack has appeared on CSDb of a C64 game I have been involved in.  The game is called 'Frixxion' and I pixelled the title screen logo, the background graphics and the sprites, with code handled by Trooper. 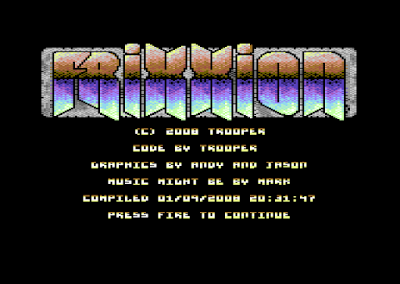 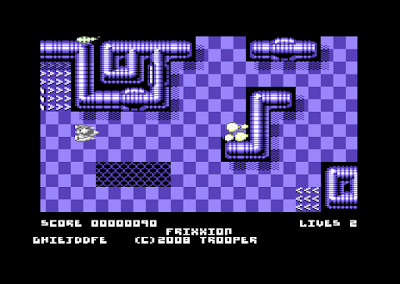 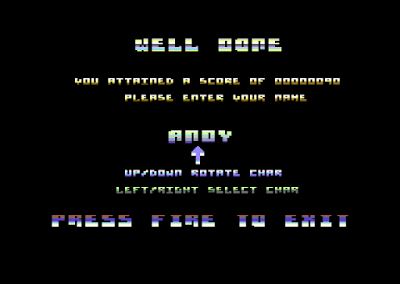 After working with Trooper on my 'Hex Files Advert', I became involved in this game that was already a work-in-progress, with temporary graphics by T.M.R.  The work Trooper did on the game prior to my involvement is detailed in a diary on his website here...  (please note, Trooper seems to have a habit of moving and/or breaking his site, so if the link doesn't work, blame him!)

The idea for the game is for it to be a shoot 'em up, with a small twist being that the player's ship is just barely off the surface of the background, thus can be affected by it - the game name 'Frixxion' is a play on the word 'friction'.  Trooper asked for some new backgrounds and sprites which I duly provided, along with a logo for the title screen which wasn't originally requested but seems to have gone down well since it has been used!

Back to the crack, I think a demo build of Frixxion is available from Trooper's website so I'm guessing that's where Onslaught obtained it from.  If not, it wasn't me that spread it honest!  The crack version, which fixes a few issues with the original test build, can be downloaded from CSDb here...

However, by downloading direct from this blog, not only do you get the crack version mentioned above, you'll get the original test build from September 2008 (which is what the crack is based on I guess), the title screen logo in Koala format and the background and sprites in their original Charpad and Spritepad formats (links to get the required Charpad/Spritepad versions needed to open the files are in text files in the respective folders).  Get that little bundle here...